LEGO Dimensions Customs Community
Register
Don't have an account?
Sign In
Advertisement
in: Customs by CJDM1999, The LEGO Movie, The LEGO Movie Characters,
and 13 more

Harley Quinn is one of the Blind Bag characters in LEGO Dimensions 2: The Rise of Enoch, from the LEGO Movie franchise.

Mirthful, mischievous and just a little bit malevolent, Harley Quinn is The Joker’s number one sidekick/hench-person/fan. She’s endlessly loyal to her beloved Puddin’, making her the only one in all of Gotham City that he can fully count on to help with his sinisterly silly schemes. And if Harley can cause enough of a distraction for Batman that The Joker can get away? That’s all the better! 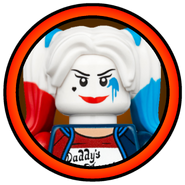