Gromit is one of the Blind Bag characters in LEGO Dimensions 2: The Rise of Enoch, from the Wallace & Gromit franchise.

Gromit (usually nicknamed "Lad", "Mate", or "Chuck" by Wallace) is Wallace's silent sidekick, best friend, and pet dog. Gromit is the brains of the duo, and often rolls his eyes at Wallace's mad antics and ideas, often having to save Wallace from many scrapes and calamities.

Born on February 12th (possibly in mid-80's), Gromit went on to graduate from "Dogwarts University" with a double first in Engineering for Dogs. He enjoys knitting, playing cards, reading the newspaper, building things, and cooking. His prized possessions include an alarm clock, bone, brush, and a framed photo of himself with Wallace. He also cherished his giant vegetable marrow grown for the annual Giant Vegetable Competition shown in The Curse of the Were-Rabbit. He is also very handy with electronic equipment and often helps Wallace with his many inventions. It is also shown that he is an excellent airplane pilot, with the ability to fly just about any kind of small plane. In A Close Shave, he flew a small monoplane with a porridge gun to thwart Preston, the evil dog, and he was able to pilot a toy biplane in The Curse of the Were-Rabbit, though this is hard to explain since the plane was a toy and not meant to fly. He also had little trouble operating the plane's bomb doors in order to get rid of Philip, his nemesis. 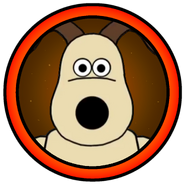