"My ring's power levels are looking good. Let's get to work."

Green Lantern is one of the Blind Bag characters in LEGO Dimensions 2: The Rise of Enoch, from the DC Comics franchise. 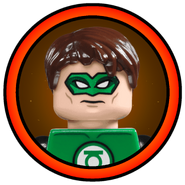