LEGO Dimensions Customs Community
Register
Don't have an account?
Sign In
Advertisement
in: Customs by CJDM1999, Custom Characters by CJDM1999, Marvel,
and 21 more

Green Goblin is one of the Fun Pack characters in LEGO Dimensions 2: The Rise of Enoch, from the Marvel Comics franchise.

Norman Osborn was a brilliant bio-chemist/inventor who was the founder, co-owner and CEO of Oscorp Industries. Norman was very wealthy and his son Harry Osborn was the best-friend of Peter Parker whom Norman considered to be the son he never had. Searching for superpowers, Norman created a chemical formula which would become known as the Goblin Formula that gave him super-strength, healing, speed, stamina, reflexes and agility. The formula also however caused Norman to develop split-personalities with one being Norman and the other being the Green Goblin, a power-hungry villain who embodied all of Norman's worst traits and became one of Spider-Man's arch-enemies. 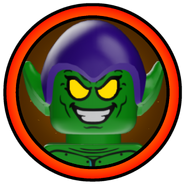 The Rise of Enoch Character Icon
Community content is available under CC-BY-SA unless otherwise noted.
Advertisement