Green Arrow is one of the Blind Bag characters in LEGO Dimensions 2: The Rise of Enoch, from the DC Comics franchise.

Oliver Queen was the heir to Queen Industries and a vast fortune that came with it. However, at a young age his parents were killed. Ollie grew up into a disrespectful playboy. As an adult, he was assumed dead after an accident left him stranded on a deserted island. To survive, Ollie constructed a makeshift bow and used his natural affinity for archery to hunt and survive on the island. During his time there, he discovered a village which had been desolated by drug traffickers. Ollie was able to escape the island when the traffickers returned. He donned a disguise made from the island's fauna and grease from their ship. Using his bow, he managed to defeat them and return to the mainland, where they were handed over to the authorities.

From his time on the island and his experience with the traffickers, Ollie became hardened and developed strong political views. He took more of an interest in Queen Industries, using its state of the art technology to begin a career as the vigilante Green Arrow. His best-known equipment is a collection of trick-arrows, which make use of a specialized gimmick to make them well suited for specific situations.

Green Arrow has been a core member of several iterations of the Justice League of America, often as the team's political consciousness. Arrow's views have put him at odds with Hawkman, Batman, and Green Lantern, though he has been able to put aside his differences with Batman, for a working relationship, and developed a strong friendship with Hal Jordan. While in the Justice League, Green Arrow also met Black Canary, whom he fell in love with. 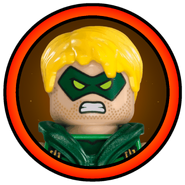