LEGO Dimensions 2: The Rise of Enoch

Autocratic Monarch of the Grand Empire

"All of the Multiverse will bow to me!"

"I shall slaughter all who dares to oppose me!"

"All hail the Grand Emperor!"

Grand Emperor Enoch, Lord Enoch, lesser known by his birth name Enoch Evilyan, or simply Enoch, is one of the Polybag characters and titular main antagonist in LEGO Dimensions 2: The Rise of Enoch and husband of Evilina, later "widower" and father of Eron and Elena.

Enoch Evilyan was born on November 9, 1888 in a planet years before it's terraformation into the dark world known to many as Oklarthia. He was convicted in 1900 for the murder of over 700 people and had been on death row for 120 consecutive years at Marx County Penitentiary. While in jail, he has gained something of a reputation for his skills in art with his propaganda posters and what he terms his "power fantasy".

As the main villain in LEGO Dimensions 2: The Rise of Enoch, he stayed in prison and awaiting execution after 120 years. After appearing before the executioner, his two children and prisoners appear out of the Rift and start to destroy everything around, allowing Enoch to evade the executioner and making a government of his own. He then kills the leader and declares his intention on ruling the multiverse by using the power of the current Foundation Elements to do so. Enoch then met Skella (secretly the reincarnation of Evilina) and eventually got into a relationship with her. At his castle, he killed the famous James McBrick by absorbing his Creation Spark into his crystal, then he smirks and laughs at his now empty body.

Many years later, Enoch declares war on the Secret Society of Justice and unleashes his Grand Empire to retrieve the Foundation Elements and stop the heroes: Andy Abernathy, Elizabeth Amana, Walter Abernathy, Christina Hardt, Donathan Yelnats, Braum, Braun, and Hugo from doing so.

Grand Emperor Enoch arrives in the city to congratulate newly-elected President Rafael Darke and orders him to be ready for Andy and his friends.

In Enoch's Throne Room, Doomsday presents Superman's corpse to the Grand Emperor, who orders him to partner up with Darkseid to obtain the Arkenstone.

When Doomsday and Darkseid blame each other for their failure at the Lonely Mountain, Enoch angrily silences them and threatens them to fuse them together if they fail him again.

Darkseid of the Force

Back at Enoch's Castle, the furious Grand Emperor Enoch fuses Darkseid and Doomsday together into one being as a promised punishment for their second failure.

When the Underminer and Bomb Voyage arrive in Enoch's Throne Room, the Grand Emperor himself offers them money if they help him obtain the Foundation Elements.

Lord Voldemort arrives at Enoch's Castle and presents the Elder Wand to him. Enoch is then informed by his cubic companion, EX-PO, that he used the Foundation Elements to calculate the dimensional co-ordinates of Foundation Prime.

Grand Emperor Enoch arrives at the Cathedral of the Cosmos and meets Foundation Crime. He offers the crime syndicate jewels and gold if they help him get the Foundation Elements.

At the Temple of Foundation, Grand Emperor Enoch and Foundation Crime take down the Temple Guardians and steal the Gauntlet of the Gods. Enoch then opens a rift to send them to Enoch's Castle.

Back in Enoch's Throne Room, Enoch is informed by Bellosh that he and his underlings failed to obtain the Foundation Element, to which Enoch tells him he will get them all anyway.

Weep What You Sow

Grand Emperor Enoch communicates with President Darke via hologram, ordering the political puppet to sign a bill that would allow the Grand Empire to take permanent ownership of property.

Enoch is seen in a vision shown to Andy Abernathy, brutally killing all of the heroes and using his power to destroy the Multiverse. Enoch feels Andy's presence and orders President Darke to destroy the returning heroes.

Grand Emperor Enoch sends a broadcast message to the entire Multiverse and demands everyone to surrender. While he holds Liz hostage, he kills Andy's brother Dean by taking his Creation Spark (soul). Sometime after Andy enters his throne room, Enoch reveals that he, through Vaden, forced the boy to collect the Foundation Elements, enabling the Grand Emperor to claim all of their powers at once and use them to destroy the Multiverse and recreate it to what he sees fit to his rule. After the first phase of the final battle, Enoch uses his powers to bring the castle down on the heroes, causing him to pass out. Just as the heroes were about to take back the Foundation Elements, Enoch breaks out of the rubble and drains all of their powers using the Gauntlet. Enoch then summons a fleet of Star Dreadnoughts and begins to use the combined powers of the Foundation Elements on everyone. After an intense game of tug of war, Andy eventually takes the Gauntlet away from Enoch and overwhelms him with the elements' combined power, killing him and starting a chain reaction of explosions across the surface of Tyranos.

In the post-credits scene, Enoch is indirectly mentioned by Evilina's reincarnation, who pledges herself to Lord Vortech.

Though it would seem to be the end of him at the end of the story, Enoch would eventually return in some form as his damned soul is eternally trapped in Gehenna, where he would be subjected to punishment. Since he now resides in the eternal plane, it is possible that he could be summoned through a sacrificial ritual that requires a physical body to manifest.

While wielding the Dark Spark, Enoch possess a destructive and immortal power, which allowed him to live as long as he wants. He has featured feats of strength such as Dark Magic, summoning Rifts, Telekinesis, Super Strength, Mind Control, and so much more. Similar to Vigo's attack on the Ghostbusters, he can withstand the proton beams and use them to Cross the Streams (try to imagine all life as we know it stopping instantaneously and every molecule in our bodies exploding at the speed of light), making him extremely dangerous. Enoch can even take everyone down with the Dark Spark's full power, leaving his victims paralyzed temporarily.

After drawing up the power of the Foundation Elements, his powers become more advanced and godlike.

As seen from Enoch's radical behavior when confronted by the Iron Resistance, Enoch is a ruthless, cold-blooded psychopath with no redeeming qualities. He had never believed in good, as he was mistreated pretty harshly and abandoned by his parents due to the deathly nature of the Dark Spark. When Andy told him that he can't be truly evil and that he can make a change for himself, he lashed out and attacked Andy, saying that he only believes that evil is a greater good and that he lives by it for the rest of his life. He is known to be a cruel hypocrite, such as threatening to kill either Andy's future girlfriend or the Multiverse in no more than a minute, only for him to wait long for Andy to arrive and spare everyone including Elizabeth Goldbrick.

"I have more important matters to attend to."

"Everything is going according to plan."

"Pah! My patience has reached it's end!"

"It's foolish to defeat me in my own world."

-Grand Emperor Enoch when being in Tyranos.

The music goes into a demonic chorus, combined with the creepy bell and a seemingly eerie choir.

The final boss music originated from the LEGO Pirates of the Caribbean video game in the battle with Blackbeard at the Fountain of Youth. 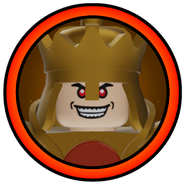 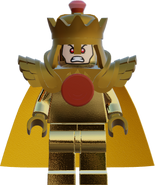 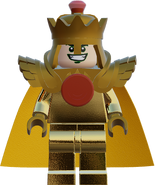 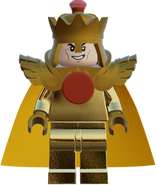 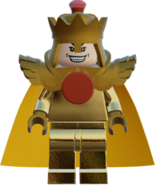 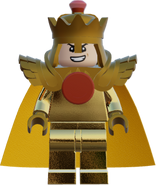 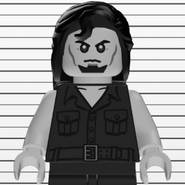 His toy tag is orange with fire patterns and his name on it.