Gideon Gleeful is one of the Blind Bag characters in LEGO Dimensions 2: The Rise of Enoch, from the Gravity Falls franchise.

Gideon Charles Gleeful (born early July of 2002 in Gravity Falls, Oregon) is a fraudulent child psychic, whose hunger for ultimate power motivates him to manipulate and intimidate others into giving him what he wants. A sworn enemy of the Pines family, he serves as a major antagonist in Season 1, until his eventual defeat and incarceration in the last episode. He was largely absent from the first half of Season 2 but returned during the final half of the season. Despite being an antagonist throughout the majority of the show, he later realizes his former ways are wrong during Weirdmageddon and is trying to restart his life as a good, regular kid. He is the pentagram with an eye on the Zodiac. 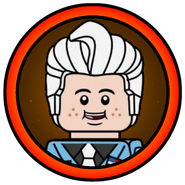