Sword of the Six Sages

King of the Thieves

The Great King of Evil

Lord of the Gerudo

Ganondorf is one of the Fun Pack characters in LEGO Dimensions 2: The Rise of Enoch, from the Legend of Zelda franchise.

Ganondorf Dragmire (ガノンドロフ Ganondorofu?), known as the King of Thieves, the Great King of Evil, the Emperor of the Dark Realm, or the Dark Lord, is the primary antagonist of the majority of games in the Legend of Zelda series. Ganondorf was born a member of the Gerudo; as the only male member to be born in a hundred years, Ganondorf is made either the King of the Gerudo or the Guardian of the Desert, depending on the game. Gifted with powerful magic, Ganondorf often seeks the omnipotent Triforce to grant his wish of conquering the entire world. He frequently wields the Triforce of Power, and stages coups against the Royal Family of Hyrule to take the Hyrulean Throne by force. In the English-localized game manual of The Legend of Zelda: A Link to the Past, his alias before his incursion into the Sacred Realm is stated to have been Mandrag Ganon, meaning "Ganon of the Enchanted Thieves".

The Triforce of Power that Ganondorf usually holds grants him near-immortality; the only weapons that can truly defeat him are the Triforce itself, the Master Sword, the Silver Arrows, the Four Sword, and the Light Arrows. In addition to granting him power, the Triforce of Power allows Ganondorf to transform into a beast form, Ganon, reminiscent of a pig or hog.

During events of the ending of The Legend of Zelda: Ocarina of Time, the timeline of The Legend of Zelda series was severed into three separate timelines. Thus the Ganondorf from Ocarina of Time had three different future incarnations, each eventually meeting their end at the hands of different Links at some point. While most incarnations of Ganondorf are the same individual, it was explained in Hyrule Historia that the Ganondorf who appeared in Four Swords Adventures was the reincarnation of the one that appeared in Twilight Princess and Ocarina of Time. 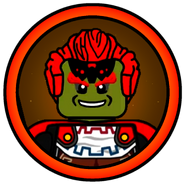