When Finn Campbell Mertens was a baby, he was abandoned by his parents and was later, found by a couple, going "boom boom" on a leaf. The couple adopted him and raised him as their own, along with their son Jake, who just like his parents is a dog. Over time the two became pretty close and considered each other's brothers.

Eventually, the two ended up moving in with each other, in their own treehouse. 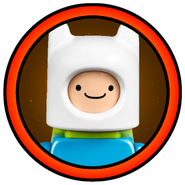