LEGO Dimensions Customs Community
Register
Don't have an account?
Sign In
Advertisement
in: Customs by CJDM1999, Custom Characters by CJDM1999, E.T. the Extra-Terrestrial,
and 18 more

E.T. is one of the Fun Pack characters in LEGO Dimensions 2: The Rise of Enoch, from the E.T. the Extra-Terrestrial franchise.

As the mothership of a unnamed alien species came to Earth, a single alien accidentally fell out of it. The mothership returned to space, so the alien was stuck on the blue planet at this time. A human kid named Elliott found it, and the alien was making a connection to him. Elliott nicknamed the alien "E.T." (short for "Extra-Terrestrial"), and was taking it home to hide it from the government. With the help of Elliot and his siblings, E.T. built a "telephone" to call home, so his mothership can take him with them.

Sadly, the government found E.T. and took him to a laboratory, to make tests with him. Losing connection to Elliott made him weak, so both Elliot and E.T. are in danger. Elliott was calling his friends to rescue E.T., they made it, but Elliott and E.T. are too weak, and both of them might die. A group of surgeons was trying to save E.T., but he was clinically dead by the time.

Elliott heard that E.T. is dead, and wanted to say goodbye. But his touch then revived E.T. and E.T. was telling Elliott, that his species will return to Earth, so E.T. can go home. Elliott and E.T. were travelling by bicycle, to make it to the woods, where they've met the first time, while being chased by the government.

E.T.'s mothership arrived, but before returning to his home planet, E.T. told Elliott that he will be always stay with him, touching his heart, making the connection between them even stronger. In the end, E. T. finally returned to his home planet. 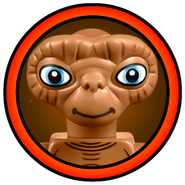