Dry Bones is one of the playable in-game characters in LEGO Dimensions 2: The Rise of Enoch, from the Super Mario franchise.

Dry Bones are enemies who are bony, skeletal, dried out, undead, Koopa Troopas. Dry Bones first appeared in Super Mario Bros. 3 where they, like their kindred, walked on four legs. In later games, Dry Bones and their living counterparts would start to walk on two legs, starting with Super Mario World for the SNES.

Like most of the enemies in the Mario series, Dry Bones's appearances grew dramatically over time. Its current appearance was in Mario Super Sluggers. 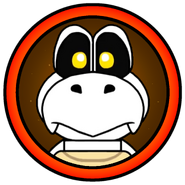