"Nothing will stop my plan to take over the Multiverse!"

"Soon, the Multiverse shall grovel before the genius that is Doctor Octopus."

Doctor Octopus is a playable character in LEGO Dimensions: The Multiverse Curse, from the Marvel Comics franchise. 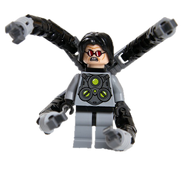