Deadpool is one of the Blind Bag characters in LEGO Dimensions 2: The Rise of Enoch, from the Marvel Comics franchise.

Deadpool, aka Wade W. Wilson, is a mercenary, and will act for good or for evil, depending on which pays the most. When he was very young, his mother died of cancer, and his father was murdered. As an adult, Wade joined Project X, where he worked as a mercenary. After traveling around the world on various missions, Wade returned to America. Shortly thereafter, he was diagnosed with terminal cancer. His only hope of a cure was Department K, the branch of the Canadian government that created the Weapon X program. As the cure, he was granted regenerative healing abilities derived from Wolverine's mutant cells. He now had Wolverine's healing mutation, though to a far greater extent. He can survive injuries too severe for Wolverine, being able to regenerate from just one living cell. However, his body constantly remains horribly scarred, even though he is in perfect health. Now Deadpool no longer works for Department K, as he is an assassin and mercenary. Knowing that he is almost impossible to kill, he talks freely, earning him the nickname the "Merc with a Mouth".

Unlike most characters, Deadpool breaks the fourth wall, meaning that he is fully aware that he's a fictional character. He frequently brings this up, thoroughly confusing most and leading some to believe he is insane, which may or may not be entirely true. 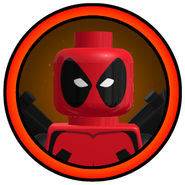