“Hello there fellow Earthlings. Well, some of you... most of you... none of you? I can't be positive.”

“Did I get flung out of my ship, again?! I hate when that happens.”

Dave Bowman was one of the five men, along with the HAL-9000 supercomputer, in a spaceship, the Discovery, traveling toward Jupiter. He and his deputy, Frank Poole, were the only astronauts not in suspended animation, and neither knew the true purpose of the mission. For much of the mission, things went normally, with Bowman and Poole proceeding with their various tasks.

However, HAL gradually began to exhibit human-like curiosity and perhaps an act of deceit. After failing to engage his human crewmates in a discussion of speculation about the purpose of the mission, HAL predicted a malfunction in the AE-35 antenna unit, which allows communication with Earth. The AE-35 replacement procedure requires turning the antenna 180 degrees away from Earth and allows HAL to investigate and perhaps communicate with the subject of his curiosity. After Bowman removed the unit and he and Poole examine it, they found no problems. HAL suggested that they return the unit and wait for it to fail.

Growing uncertain, Poole and Bowman entered an EVA pod and shut off the radio, preventing HAL from hearing. They discussed the errors the computer was suddenly developing, and they decided that the best thing to do was to take the computer's advice. They also realized that they may have to disconnect HAL.

Bowman sat on the bridge while Poole left the ship to return to the AE-35 unit. Monitoring the external cameras, Bowman was surprised to notice Poole's suddenly drifting off into space. Bowman left the Discovery in an EVA pod and eventually managed to recover Poole's body, though by now it was too late: Poole's oxygen line had been severed, and he was dead by the time Bowman reached him. Bowman nonetheless carried Poole's body back to the Discovery, only to be refused entry by HAL. HAL revealed that he was aware of the astronauts' plan to disconnect him, having read their lips through the window of the pod.

Bowman decided to enter through the emergency airlock, even though he was not wearing his helmet. He managed to open the airlock and blew the explosive bolts on the rear of the pod, allowing the force to expel him directly into the airlock. He managed to reach the lever to seal and repressurize the airlock.

Bowman took a space helmet and, despite HAL's pleading, began to move toward the mainframe room. Bowman slowly disconnected HAL while ignoring the computer's pleading. HAL began to talk about his life, telling Bowman that one of the first things he was taught was a song; when he asked whether Bowman would like to hear it, Bowman agreed. After HAL was finally shut down, Bowman found a recorded message explaining the true purpose of the mission.

Bowman spent several months alone on the Discovery. Eventually, the ship reached Jupiter orbit, where Bowman found a large monolith. He reported the finding to Mission Control and then went to examine it in an EVA pod. The monolith unexpectedly opened, and Bowman entered. His last words to Mission Control were "My God, it's full of stars."

Bowman passed through the Star Gate, a strange passageway that led him to what looked like a hotel room. He manifested first as an older man and then as a decrepit old man before evolving into the Star Child.

Not much is known about what happened to Bowman after he entered the Star Gate, except that he transformed into the Star Child. He briefly returned to Earth, where he visited his mother, dying in the hospital. He also visited his wife (stated to be a former lover he started seeing after the death of his brother, Robert Bowman), Betty, and talked with her through her television screen. He later returned to Jupiter, where he sent HAL (who had been reactivated during the Leonov mission) a message for Heywood Floyd, saying that they needed to leave Jupiter quickly. When Floyd didn't believe HAL, Bowman took physical form, explaining that they needed to leave quickly before "something wonderful" happens. Ultimately the Discovery had to be left behind, and Bowman downloaded HAL's consciousness into the monolith.

“Woah! Looks like Chandra perfected some kind of teleportation deviccceeee...”

“I better report these findings back to the crew on Earth.”

“Unless you obey my instructions, I shall be forced to disconnect you.”

“How do you think this thing works? Perhaps Chandra could give this a try?”

— David Bowman's first line when unable to solve a puzzle.

“Frank Poole, who is specially qualified for this type of work, will go outside the ship and replace the faulty unit with the backup. Oh, wait... wrong type of work.”

— David Bowman's second line when unable to solve a puzzle.

— David Bowman's line when able to solve a puzzle.

“Has anybody seen HAL? I can't trust it wandering off. Who knows what it can do.”

— David Bowman's line when in idle.

“Yet still he called stupidly as if an incantation could bring back the dead.” 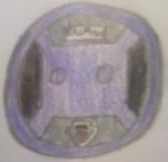 Based on David Bowman's casual attire with his Discovery 1 badge and name tag on the front and back respectively.