Darth Vader is one of the Team Pack characters in LEGO Dimensions 2: The Rise of Enoch. He appears in the Rule of Two Team Pack alongside Darth Sidious for the Star Wars franchise.

Darth Vader (formerly Anakin Skywalker) was once a Jedi Knight and expert pilot trained by Obi-Wan Kenobi, but his emotions (particularly his fear of loosing Padmé) caused him to give in to his anger and aggression, leading to him being turned to the dark side of the Force by Darth Sidious. This new path caused him to join the Sith and resulted in a duel with Obi-Wan. Vader lost this duel, which resulted in him having to permanently wear body armor and a life-support system.

Vader soon became a feared leader of the Empire. He became an enemy to the Rebellion. He killed many Jedi and Rebel leaders for arround thirty years. He had a son and a daughter, Luke Skywalker and Leia Organa respectively. However, due to complications, he did not know Luke was his son until after the first Death Star blew up, and he did not know Leia was his daughter until the day he died. Darth Vader dramatically told Luke "I am your father" in Cloud City, when they dueled at the climax of Episode V. During the same duel, Vader was responsible for cutting off Luke's right hand. Soon the the two met again for a final duel. Luke won the duel but Palpatine fired out Force lightning at him. Anakin Skywalker (no longer Vader) saved Luke and threw Palpatine into the reactor core of the second Death Star, but died shortly after. Anakin was then seen as a Force ghost by his son. 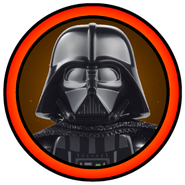 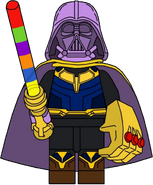