"The forces of Apokolips will rule over all."

"The universe shall belong to me."

Darkseid is one of the Big Figure Pack characters in LEGO Dimensions 2: The Rise of Enoch, from the DC Comics franchise.

Darkseid is an enemy of Superman, arch-enemy of the Justice League and ruler of the post-apocalyptic world, Apokolips. He is one of the most dangerous villains in the DC universe, being immortal and nearly omnipotent. Darkseid plans to turn Earth into a copy of Apokolips and become it's ruler. His one true weakness is he is vulnerable to his own Omega Beams (his laser eyebeams) but because he can change their direction at will, he is difficult to harm.

His minions include Desaad, Kalibak, Lashina, Mad Harriet, Steppenwolf and a Parademon army, among others.

"You waste my time."

"They wish to challenge Darkseid? Pitiful!"

-Darkseid's first line when in combat.

"I shall defeat you in an instant!"

-Darkseid's second line when in combat.

"I shall deal with this."

-Darkseid's first line when able to solve a puzzle.

"If I must demonstrate my powers, I will..."

-Darkseid's second line when able to solve a puzzle.

"What? I cannot use this? This is not possible!"

-Darkseid's first line when unable to solve a puzzle.

"What kind of trick is this? Something I cannot use?"

-Darkseid's second line when unable to solve a puzzle.

"Everything will belong to me."

"I have seen wonders beyond all imagination which pales this meagre prize into insignicance... but I'm keeping it anyway."

Tyrannical ruler of the planet Apokolips, Darkseid is one of the Justice League's most dangerous foes. Using his varray of incredible powers, such as his Omega Beams, Darkseid now seeks the Anti-Life Equation; a formula which grants complete control of the universe to anyone who would wield it. 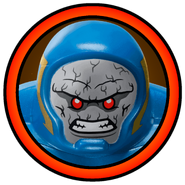