Dark Knight is one of the playable in-game characters in LEGO Dimensions 2: The Rise of Enoch, from the DC Comics franchise.

The Dark Knight is the alternate universe version of Batman from the Medieval Era who shares a similar backstory with the present-day Dark Avenger of the Night. In his childhood from that era, Thomas and Martha Wayn, parents of the man who would become the knight in the shadows, were slain by an unidentified man, who is the alternate universe counterpart of Joe Chill. 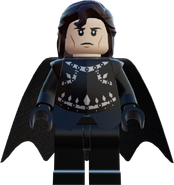