Member of the Teen Titans

Cyborg is one of the Blind Bag characters in LEGO Dimensions 2: The Rise of Enoch, from the DC Comics franchise.

Half of Victor Stone's body was destroyed in a tragic accident. He was saved through experimental technology created by his father Silas Stone, and his body parts were replaced with high-tech gadgets and weaponry. To have Vic around people who may understand his condition, Silas asked the Teen Titans (Robin/Nightwing, Donna Troy, Kid Flash, Beast Boy and Raven) to accept Vic among them as Cyborg, and in exchange he built the Titans' Tower. Then Vic was part of the team when they rescued and recruited Starfire.

Besides the Titans, he also is sometimes a member of the Justice League, which mainly consists of Superman, Batman, The Flash, Green Lantern, Wonder Woman, Martian Manhunter, Aquaman, and on some occasions Nightwing, Batgirl, Supergirl, and Huntress. 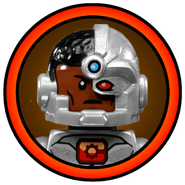