LEGO Dimensions Customs Community
Register
Don't have an account?
Sign In
Advertisement
in: Customs by CJDM1999, Custom Characters by CJDM1999, Doctor Who,
and 34 more

Enemy of The Doctor

The Cybermen is one of the Blind Bag characters in LEGO Dimensions 2: The Rise of Enoch, from the Doctor Who franchise.

First encountered by the First Doctor back in 1966 at the South Pole in the story 'The Tenth Planet,' the Cybermen are former human beings who were stripped of their humanity and turned into emotionless steel machines, to then seek other people to covert (or 'upgrade' in the case of the parallel Cybermen) and turn into more Cybermen. The ultimate Cyber creed is to survive, at any cost. They are enemies of The Doctor due to his continued interference in their plans.

Two versions of the Cybermen exist. The primary versions originated from both the near-human-inhabited planet Mondas, who gradually removed their limbs and emotions, deeming them to be needless in the wake of an increasingly hostile planet when Mondas was ripped from their twin world Earth's orbit. The Mondasian Cybermen eventually returned to Earth in 1986, intending on converting the human race since their ability to expand via reproduction had long been removed along with gender. But they were thwarted by the First Doctor and his companions Ben and Polly, resulting in Mondas exploding and destroying the Cybermen of Mondas. Unfortunately, the Cybermen had already colonized other planets, leading to an increasing array of Cyberfactions with strengthened abilities and less humanity than ever. Eventually, one faction deemed the icy world of Telos to be suitable to be the new Cyber Home World, killing the native Cryons and building a vast array of tombs to place themselves in stasis for extended periods. One tomb was disturbed by a party of archaeologists, along with the Second Doctor and his companions Jamie and Victoria. Whilst the Cybermen were, in essence, all identical, the concept of a leading figure was deemed logical, leading to the creation of the computerized Cyberplanner, the semi-emotional Cyberleader and leading the Cybermen, the Cyber Controller.

There were also Cybermen from an alternative version of Earth, named "Pete's World" by The Doctor. These Cybermen were created by the unbalanced scientist John Lumic and proceeded to attempt to update London and the parallel Earth before they were stopped by the Tenth Doctor. They have constantly upgraded themselves throughout the many encounters The Doctor has had with them.

Almost heading their way closer to Foundation Prime, the Cybermen, along with the Nindroids, Daleks and Flying Monkeys and other villains blocked Batman, Gandalf, and Wyldstyle's way but were, again defeated.

Weep What You Sow

The Cybermen make their return as enemies and appear as minor antagonists in this level. On "Dave", a Cyberman, similar to the one from the last game, encounters Andy and his friends and is easily defeated by them. Once the heroes rebuild the "power generator", more Cybermen arrive to the aid of the newly upgraded CyberKing and attempted to convert them. After the heroes defeat the CyberKing, the Cybermen once again tried to protect their king's head from the heroes as it is implied to be the source of their power. The Cybermen later joined Grand Emperor Enoch's army as hackers.

Closing in on the Temple of Foundation, the Cybermen, along with the Battle Droids, Droidekas, Sub-Ultron Soldiers, and other villains block the heroes way inside but they were again defeated by the heroes.

An army of Cybermen can be seen in the battlefield fighting the Justice League and the Avengers. One Cyberman asked Cyborg where he got his Cyber-armor, leaving his fate unknown. He is then seen fighting alongside Cyborg and Iron Man in the final battle, implying that the Cyberman's hacked systems converted him into an ally of Cyborg. The rest of the Cybermen attempted to bring down the rogue Cyberman and remove his systems but they were stopped by Cyborg. At the end, the Cyberman and Cyborg became good friends.

—Cyberman's line when leaving the game.

"Cybermen are not defeated with such ease. We will survive."

"Has anyone seen my pet Cybermat?"

"Analysis confirms I can proceed."

—Cyberman's line when about to solve a puzzle.

"Analysis indicates this will be of use."

—Cyberman's line when obtaining a collectible.

—Cyberman's line when unable to solve the puzzle.

"I am incompatible for use here."

—Cyberman's second line when unable to solve a puzzle.

"You are the Time Lord known as the Doctor, you are the enemy of the Cybermen!"

—Cyberman to The Doctor.

"You are incompatible for upgrade. We do not stock Cyber armor in your size!"

"Scans detect you are scared. We can convert you and remove your fear."

"Scans detect your Cyber armor is cooler than mine. Where did you get it?"

"Your reflexes are no match for Cyber technology."

"The time machine known as the TARDIS has been breached. It is now under the control of the Cybermen."

—Cyberman when entering the TARDIS.

"This vehicle will be converted into a Cyber-mobile."

—Cyberman when entering the Batmobile.

"I will convert this into a Cybersaurex Rex."

—Cyberman when entering the Velociraptor.

"I am going on an adventure."

—Cyberman in the vortex.

"Travelling through the vortex."

—Cyberman in the vortex.

"Your size is irrevelant to a Cyberman."

—Cyberman to a giant character or when riding a mech.

"Please standby I will be upgraded."

"You will be deleted!"

—Cyberman's line when in combat.

—Cyberman when facing a boss. 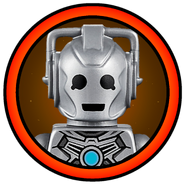