Chell is one of the Fun Pack characters in LEGO Dimensions 2: The Rise of Enoch, from the Portal 2 franchise.

In Portal, Chell is performing tests for the Aperture Science Enrichment Center, which are being overviewed by GLaDOS, an artificially intelligent computer system. Chell is antagonized by GLaDOS during her testing courses. Wielding only the Handheld Portal Device, she eventually utilizes this device as a means of avoiding hazards and bypassing various sections inside the Facility in order to escape.

Chell's origin is unclear; GLaDOS claims that in Chell's file it states that she is adopted. In Portal 2, a long-abandoned science fair poster that was part of "Bring Your Daughter to Work Day" — the same day GLaDOS became rampant — is attributed to "Chell", implying that at least one of her parents worked for Aperture Science.

GLaD to See You

Despite not appearing in the main story, Chell is mentioned in this level. GLaDOS initially confuses Wyldstyle for her.

A photograph of Chell is seen at the end of this level prior to You Wouldn't Know.

After the events of Portal 2, Chell and Wheatley return to Aperture Science Enrichment Center via dimensional vortexs, and are put to test by GLaDOS. She and Wheatley decide to work together to find a way out of Aperture Science once and for all. After completing various test chambers and escaping from the abandoned areas of the facility, the pair come face to face with GLaDOS in her Chamber. Wheatley then gets the idea to put Space Core into GLaDOS' mainframe. The duo act quickly due to GLaDOS activating the neurotoxin dispensers, despite the odds Chell makes the Core Transfer and Space Core is given control of the facility. Following GLaDOS' defeat, Chell and Wheatley discover a room behind GLaDOS' Chamber where they find a Gateway; the pair jump through it, leaving their fate unknown. 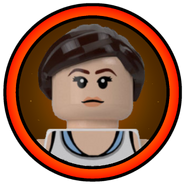