“Player, player, behind the Fourth Wall, who's the meta-est of them all?”

Ceruleus is a Starter Pack character in LEGO Voidhoppers, appearing exclusively in the Xbox 360 version of the Starter Pack. He also appears as a Fan Expo Canada-exclusive polybag, given to visitors of EB Games and LEGO's stalls.

Ceruleus was your average teenager, living a normal life in Toronto, Canada. One of his hobbies was writing, which he would publish every now and then on Fanfiction.Net and Wattpad. His entire writing career turned topsy-turvy, however, when two of his creations, during a team-up, caused a Riftquake and a Fourth Wall Break in close succession. The resulting cataclysm shattered his laptop, and ripped a hole in the fabric of the Universe. Writing in an Author Avatar on his phone as a last-ditch effort, Ceruleus managed to stop any further damage to the Universe, and get his biggest story ever finished and published in a thirty-two chapter monstrosity. After he finished, however, he forgot to write a proper disappearing sequence for his Avatar, condemning it to wandering through spacetime when the Mandala Affair started. 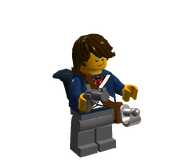 Ceruleus as he appears in the LEGO Blazer Movie.

Ceruleus... when he gets his hands on the Super Crown. And becomes Cerulea. Why did I make this?

Ceruleus, having ditched the alias and become DetectiveSky612, in LEGO Megaverse.

DetectiveSky612 in LEGO Megaverse, as seen from behind.
Add a photo to this gallery

“I leave you two alone for ONE ENDING, and now you've gone and... starred in a videogame, actually. Well done.”

— Ceruleus reacting to Cogs and Torrent

“Finally, a disappearing sequence! I've been waiting for this for... Hang on, where AM I going?”

Ceruleus jumps out of the portal, landing feet-first and running to lose momentum.

Ceruleus gets into an En-Garde position (Also known as a Sixth).

Ceruleus drops his parry and runs his hand through his hair, then steps in place, shifting his weight from foot to foot.

Ceruleus takes a run up and jumps through the portal.

Ceruleus throws his sword into the air and rushes the victim, using a San-Chin 2-punch block to get inside their defenses and then land a handful of blows on the torso. He then jumps back, catching his sword before it hits the ground.

Ceruleus throws his sword as in the previous move, then rushes the victim once again. This time, he uses close-quarters (or "Phonebooth Fighting") attacks with his elbows and ends the combo on the third strike, smashing the victim's face and chest with his entire forearm.

Ceruleus' tag is blue-and-grey, with a quill at the front.

In LEGO Megaverse, Ceruleus has an electric guitar strapped to his back as well as his sword on his hip. He uses the guitar for his Sonar Smash ability.

Retrieved from "https://lego-dimensions-customs.fandom.com/wiki/Ceruleus_(DetectiveSky612)?oldid=38785"
Community content is available under CC-BY-SA unless otherwise noted.