LEGO Dimensions 2: The Rise of Enoch

Creator of LEGO Dimensions 2: The Rise of Enoch

"Colin's my name, and creativity is my game. How can I help?"

"I can't believe I'm doing this. Being in a video game is just nuts."

"Ahem. Can somebody tell me how or when I got here? Mom's gonna be real worried if she finds out I disappeared."

"Finally, a game debut for me!"

"Ugh! I hate it when the player summons me for unexplained reasons!"

CJDM1999 is one of the Blind Bag characters and the creator of LEGO Dimensions 2: The Rise of Enoch.

Colin Jason Daniel McLean (born: Dcember 10, 1999), known online as CJDM1999, is a self-employed artist, a LEGO Dimensions fan, a wrestling fan, and the creator of LEGO Dimensions 2: The Rise of Enoch.

Under the alias called The Maker, he created the Book of the Maker as thanks to the player who completed the game 100%.

"You were making me a mere pawn the whole time? I'm out of this dump!"

"Hey Bowser. Can I share something with you from Arin? Fact number 1, you were actually supposed to play Star-Lord in the Guardians of the Galaxy movie, but Chris Pratt got you sick. So, Chris Pratt sabotaged you in order to get the role of Star-Lord. As much as it's a cheap move, I think Chris Pratt makes a better Star-Lord than you."

"Hey there, Wonder Woman. Your affair with Superman is boring and overused. Why don't you get a shot at Batman? You two are perfect for each other. A Dark Knight and an Amazon Princess." 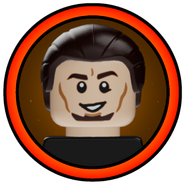