King of the Koopas

"Did somebody page the King of Awesome?"

Bowser is one of the Fun Pack characters in LEGO Dimensions 2: The Rise of Enoch, from the Super Mario franchise.

King Bowser Koopa (大魔王クッパ, Daimaō Kuppa “Great Demon King Koopa”, in English also Lord Bowser, King Koopa commonly in other media) is the primary antagonist of the Mario series and is the archenemy of Mario. Bowser most commonly kidnaps Princess Peach. He is the leader of the Koopa race. Although Bowser has joined forces with Mario in a few games, he has never ceased to kidnap Princess Peach and attempt to conquer the Mushroom Kingdom since his first appearance in Super Mario Bros..

As the central villain of one of the world’s most popular video game franchises, Bowser is easily one of the most recognizable video game villains ever, though he has comic-relief roles in most of the RPGs. Though their origins are unknown, Bowser has eight children; the seven Koopalings and Bowser Jr.

-Bowser's line when leaving the game.

"Arin! Who is this "Chris Pratt" guy? I wanna stomp him for getting me sick!"

"Mario! How dare you interfere with the fun I am having!"

"Chris Pratt! You will pay for stealing my role!"

"Princess Peach! You're mine, now!"

"You. I never forgot the day you betrayed me!"

"Junior, my boy! How about an adventure with your King Dad?"

"You call yourself a Toad? You're just a child wearing a diaper!"

"Oh, another Game Grump! I heard that your friend Egoraptor is a dinosaur!"

"Just in time to stomp you into space bits!"

-Bowser's line when in combat. 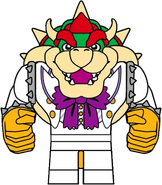 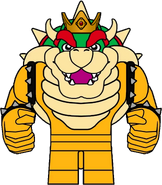 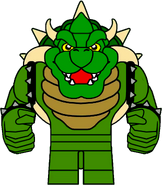 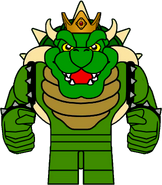 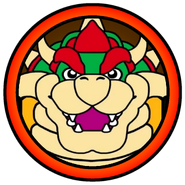