LEGO Dimensions Customs Community
Register
Don't have an account?
Sign In
Advertisement
in: Customs by CJDM1999, Custom Characters by CJDM1999, Minecraft,
and 18 more

Blazes are non-playable characters in LEGO Dimensions 2: The Rise of Enoch, from the Minecraft franchise.

Blazes are hostile mobs that spawn exclusively in the Nether. They usually spawn within Nether Fortresses and when provoked, the mob shoots three fireballs towards the Player, after they finish firing which they do very fast, they enter a cool down stage, then repeat, in both modes they can leap, fly, and survive lava. Upon death, the mob may drop a Blaze Rod, an item with many uses. 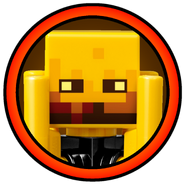