Bilbo Baggins is one of the Blind Bag characters in Lego Dimensions 2: The Rise of Enoch, from The Hobbit franchise.

Bilbo Baggins was one of the most predictable, respectable, and unadventurous hobbits in the Shire. One day, Gandalf the Grey came to Bilbo's home, Bag End, and asked him to come on an adventure. Bilbo refused, but the next day, Gandalf returned with the 13 dwarves, and they forced Bilbo to come on the adventure. When the company had reached the Misty Mountains, and Bilbo was separated, he met Gollum and found The One Ring. Over the course of the adventure, Bilbo proved his usefulness. When he got back, he generously gave most of his treasure away, but he kept some of it, including the Ring, seeing as its power made him want to keep it close. He was forced to give it up to his nephew Frodo during his 111th birthday party, (Gandalf had discovered its evil power). The Ring Quest then took place. Afterwards, Bilbo went to live with Elrond in Rivendell before leaving Middle-earth on the last boat to the Grey Havens with the rest of the elves. 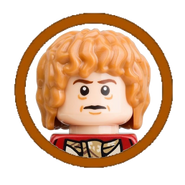 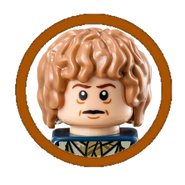 Bilbo Baggins Character Icon
Add a photo to this gallery
Retrieved from "https://lego-dimensions-customs.fandom.com/wiki/Bilbo_Baggins_(CJDM1999)?oldid=52724"
Community content is available under CC-BY-SA unless otherwise noted.