Betelgeuse is one of the Fun Pack characters in LEGO Dimensions 2: The Rise of Enoch, from the Beetlejuice franchise.

Betel Geuse Jr. or just Betelgeuse is a very rude and crude ghost. He also gets a little crazy at times. When Betelgeuse was alive, he committed suicide when he hung himself over a woman when he was drunk. His parents Nat and Bea Geuse and his brother, Donald "Donny" Geuse are also ghosts. Though he seems fun on screen, it's clear he's not a pleasant person to have around in real life, as he constantly invades people's personal space (even to the point of harassment), does disgusting things like spitting in his own coat and makes rather rude gestures. Not only that, he seems to love to scare people out of their pants and pull pranks on them. He also seems to be quite selfish, as his main goal in the movie is to lift his curse no matter who gets hurt in the process. He has the attitude of a sleazy used car salesman. Ironically, he is a ghost who eats insects. He shows an interest in Lydia Deetz during most of the movie, and in the finale, he tries to force her into marrying him, almost succeeding, until he is stopped by Adam and Barbara Maitland.

In the Teen Titans Go! episode, The Dimensions Crisis, Betelgeuse tricks Raven into using her magic to build a giant gargoyle mech that he then uses to cause chaos to ruin the Teen Titans attempt to learn how to become better builders. 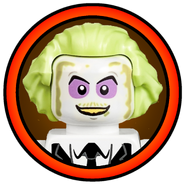