Member of the Teen Titans

Beast Boy is one of the Fun Pack characters in LEGO Dimensions 2: The Rise of Enoch, from the Teen Titans Go! franchise.

Beast Boy was originally an ordinary boy known as Garfield Mark Logan. His parents, Mark and Marie Logan, were geneticists that would travel the jungles of the world to study their wildlife. Beast Boy was brought up in the jungles of Brazil, Africa, India, and several other places. The Logans particularly became interested in a rare species of green monkeys, but the day they finally found them, something terrible happened.

Beast Boy was bitten by one of the monkeys and contracted a serious illness called Sakutia. To save him, his parents attempted to cure him with a new serum, which bestowed him with his shape-changing abilities. As a side effect, his skin, hair, and eyes turned green. Later in his life Beast Boy's parents died in a boating accident. After they died, Beast Boy was interested in a superhero team called the Doom Patrol and was determined to join them. He broke into their headquarters and was treated as an intruder, but his efforts to escape capture impressed them, thus earning his membership on the team. 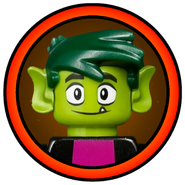