Batman is one of the playable characters in LEGO Dimensions: The Multiverse Curse, from the DC Comics franchise.

When a young Bruce Wayne witnessed his socialite parents shot dead by the mugger, Joe Chill, he vowed to bring justice to the criminals infesting Gotham City. He then trained himself in detective skills, sciences, engineering, escape artistry, martial arts, and criminal psychology. But Bruce realized that those skills would not be enough to stop the superstitious and cowardly lot plaguing the streets. While he was in his study reflecting on his parents' deaths, a bat flew into the window, both startling and inspiring him at the same time. He would become the bat to strike fear in those who preyed upon the innocent. And so, Bruce then took his mantle as a crime fighter and became known as Batman.

At first, Batman fought "plain-clothes" villains without any super powers powers or gimmicks until about six months into his career when he encountered Mr. Freeze, a scientist specializing in cryogenics-turned villain trying to rescue his dying wife. Batman's rogues gallery expanded to include other villains, many of which are insane, such as Bruce Wayne's former best friend, the hideously scarred Two-Face, The Riddler who challenges Batman's intellect rather than his strength, Gotham's gentleman of crime with an obsession for birds and umbrellas, The Penguin, and the clown prince of crime, The Joker, among others.

While Batman's rogues gallery grew, his allies did too, including his butler, Alfred , who tends to Bruce Wayne's needs behind the scenes and serves as his confident; Tim Drake, better known as the third Robin or Red Robin; Dick Grayson as Nightwing, or formerly the first Robin; Damian Wayne, Batman's son who soon became the fifth Robin; Red Hood, the second Robin who became a twisted and violent vigilante; Police Commissioner James Gordon, and his daughter, Barbara Gordon who became Batgirl; Jean-Paul Valley as Azrael, a college student who had been brainwashed by a religious organisation; and The Spoiler, or Stephanie Brown who is the daughter of a minor villain, as well as occasional allies such as Huntress (Helena Bertinelli) and Catwoman (Selina Kyle, who are both allied with and against Batman and his other allies at times. Batman also leads the Outsiders, a rag tag group of Super Heroes operating in Gotham City, which includes heroes who are not directly allied with Batman otherwise, such as Katana.

Batman is also a founding member of the Justice League, an organisation of Super Heroes untied to handle threats too big for one hero. Other Justice League members include Superman, Wonder Woman, Green Lantern, Cyborg, Aquaman, Flash, The Martian Manhunter, and occasionally, Batgirl, Nightwing, Huntress, Zatanna, Hawkman, and Shazam.

Batman is one of the three main protagonists in LEGO Dimensions. He and his sidekick Robin (Tim Drake) were chasing Bane in the streets of Gotham City, but he witnessed Robin being sucked into a vortex with a piece of Kryptonite unbeknown to Batman that was the Foundation Element for DC Comics. He came to the Mines of Moria in Middle-earth to Gandalf's aid as he was about to slay the Balrog, rescuing him from being killed in the pit below. After witnessing Frodo being sucked into the vortex with the One Ring, the two soon found themselves in Cloud Cuckoo Land, where they met Wyldstyle, just after MetalBeard went missing; a petty fight between him and LEGO Movie Batman occurred. Soon, the trio sucked into another vortex, sending them into Vorton, and after rebuilding the LEGO Gateway, they arrived at the Yellow Brick Road in Oz, starting their journey to save the LEGO Multiverse.

He is first seen alongside Robin (Damian Wayne) chasing the Joker to the Amusement Mile after a crime spree. They defeat the Joker, only for him to be sucked into a portal and then being attacked by a corrupted Stranger. Batman and Robin defeat them and bring them to the Batcave to determine their origin, deducing that Lord Vortech might have something to do with their sudden appearance. Batman sends a message to X-PO, who is later attacked by Lord Vortech, limiting the use of the Gateway.

At the beginning of Level 4: Loki Business, He, Robin and the Stranger are sent to Vorton through the now repaired Gateway.

"I'm leaving this in your own hands."

"Gotta go figure out a plan of attack..."

"Should be able to figure this out... I am Batman, after all."

- Batman when about to solve a puzzle.

"Hmm... I think the tool for this job is in my other Batsuit."

- Batman when unable to solve a puzzle.

- Batman when obtaining a collectable.

"You shouldn't be here, Alfred. It's dangerous!"

"Who are you? How did you get that Batsuit?"

"I'll be keeping an eye on you. No tricks, Selina."

"Those aren't toys, kid! Put those down!"

- Batman when seeing The Riddler

"Hmm... This would make a good portable Batcave."

- Batman when riding the Mystery Machine or Sniper's Camper Van

"Why does the Flash even need this? He's already the Fastest Man Alive."

- Batman when riding the Flashmobile.

"You may have the size advantage, but remember. I'm Batman."

- Batman when seeing a big character or riding a mech. 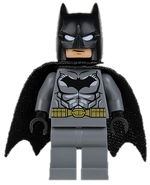 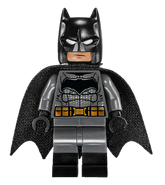 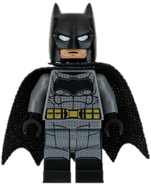 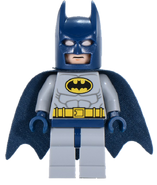