Batman is one of the Team Pack characters in LEGO Dimensions 2: The Rise of Enoch. He appears in the Dynamic Duo Team Pack alongside Robin for the DC Comics franchise.

When a young Bruce Wayne witnessed his socialite parents shot dead by the mugger, Joe Chill, he vowed to bring justice to the criminals infesting Gotham City. He then trained himself in detective skills, sciences, engineering, escape artistry, martial arts, and criminal psychology. But Bruce realized that those skills would not be enough to stop the superstitious and cowardly lot plaguing the streets. While he was in his study reflecting on his parents' deaths, a bat flew into the window, both startling and inspiring him at the same time. He would become the bat to strike fear in those who preyed upon the innocent. And so, Bruce then took his mantle as a crime fighter and became known as Batman.

At first, Batman fought "plain-clothes" villains without any super powers or gimmicks until about six months into his career when he encountered Mr. Freeze, a scientist specializing in cryogenics-turned villain trying to rescue his dying wife. Batman's rogues gallery expanded to include other villains, many of which are insane, such as Bruce Wayne's former best friend, the hideously scarred Two-Face, The Riddler who challenges Batman's intellect rather than his strength, Gotham's gentleman of crime with an obsession for birds and umbrellas, The Penguin, and the clown prince of crime, The Joker, among others.

While Batman's rogues gallery grew, his allies did too, including his butler, Alfred, who tends to Bruce Wayne's needs behind the scenes and serves as his confident; Tim Drake, better known as the third Robin or Red Robin; Dick Grayson as Nightwing, or formerly the first Robin; Damian Wayne, Batman's son who soon became the fifth Robin; Red Hood, the second Robin who became a twisted and violent vigilante; Police Commissioner James Gordon, and his daughter, Barbara Gordon who became Batgirl; Jean-Paul Valley as Azrael, a college student who had been brainwashed by a religious organisation; and The Spoiler, or Stephanie Brown who is the daughter of a minor villain, as well as occasional allies such as Huntress (Helena Bertinelli) and Catwoman (Selina Kyle, who are both allied with and against Batman and his other allies at times. Batman also leads the Outsiders, a rag tag group of Super Heroes operating in Gotham City, which includes heroes who are not directly allied with Batman otherwise, such as Katana.

Batman is also a founding member of the Justice League, an organization of Super Heroes untied to handle threats too big for one hero. Other Justice League members include Superman, Wonder Woman, Green Lantern, Cyborg, Aquaman, The Flash, Martian Manhunter, and occasionally, Batgirl, Nightwing, Huntress, Zatanna, Hawkman, and Shazam!.

Batman is one of the three main protagonists in LEGO Dimensions. When Robin, Frodo, and Metalbeard are each pulled into the vortexes, each unknowingly in possession of one of the Foundation Elements, Batman alongside Gandalf and Wyldstyle all jump in after them. The three get pulled into the same vortex and appear on Vorton, where the vortex generator they came out of explodes, prompting them to rebuild it. Aided by X-PO, the three use the generator to travel through the multiverse to search for the five missing keystones that power the generator and the Foundation Elements, hoping to find their missing friends and stop Lord Vortech's plan from succeeding. Along their journey, they meet and assist the various heroes of the worlds they visit, such as Homer Simpson, The Doctor, Doc Brown, Dorothy Gale among others while fighting numerous villains, like the Wicked Witch of the West, Master Chen, The Riddler and Lord Vortech himself. However, Vortech eventually finds out that X-PO is helping them. The heroes travel to Foundation Prime to find their friends and fight Vortech, but it turns out it was a diversion that allows the villains to ambush X-PO and retrieve the Foundation Elements that the trio had previously collected, allowing Vortech to unlock the foundation of the multiverse: a green LEGO building plate. This imbues Vortech with near-unlimited power, and he merges Frodo, Metalbeard, Robin and a piece of himself into a giant robot mutant known simply as The Tri, sending it to wreak havoc on the trio's worlds.

After freeing their friends from inside the Tri, they destroy the Vortech piece, causing the Tri to implode. After the Tri's defeat, Batman realizes that they are going to need all the help they can get to defeat Vortech. The trio recruits The Doctor, Mystery Inc., the Ghostbusters, the space ship Defender, Doc Brown and Marty McFLy and even GLaDOS to defeat him. While the Doctor, GLaDOS, and X-PO work on a plan to seal Vortech in a rift loop, the heroes head to Foundation Prime, fighting Vortech along the way. With their allies' help, they are able to destroy the Lego plate, which causes Foundation Prime's palace to collapse and infuriates Vortech. He grows to an enormous size and attacks the trio, but the Doctor is able to manipulate the portal technology and sucks all of them into a rift loop. Using a special device he, GLaDOS, and X-PO designed, the heroes are able to seal Vortech in an endless rift prison for all eternity, saving the dimensions.

Batman and the Justice League are seen being held hostage, forced to watch Superman die in the presence of the Gold Kryptonite. Just before he does though, Andy and his friends arrive to take the Foundation Element, but it was too late as Doomsday arrived to kill a weakened Superman. He is then seen carrying Wonder Woman in his arms as he and the rest of the Justice League retreat to Vorton.

-Batman's line when leaving the game.

"I'm leaving this in your hands."

"Oracle, how do I beat this thing? Ah, I'll just keep hitting it."

-Batman when confronting a boss.

"It's not who I am underneath, but what I do that defines me."

"I think there's a pebble in my suit... Can-can everyone turn around for a second while I change?"

-Batman's line when in the vortex.

-Batman's line when in combat.

-Batman's second line when in combat.

"I can handle this. Always pays to be prepared."

-Batman's line when about to solve a puzzle.

"I should be able to deal with this."

-Batman's second line when about to solve a puzzle.

"Didn't expect to run into something like this... I can't use it."

-Batman's line when unable to solve a puzzle.

"This isn't exactly in my wheelhouse. Someone else'll need to try."

-Batman's second line when unable to solve a puzzle.

"Perhaps this is another clue..."

-Batman's line when obtaining a collectible.

"Hm... this Mystery Machine would make a good portable Batcave..."

-Batman when entering the Mystery Machine.

"This may be low-tech but it should get the job done."

-Batman when using the Arrow Launcher.

"This is a little too bright to be a Bat-cycle... Robin-cycle maybe!"

-Batman when riding the Blade Bike.

"You may have the size advantage, but remember. I'm Batman."

-Batman when seeing a giant character or when riding a mech.

"I reckon I could still squeeze some more features into it."

-Batman's line when upgrading a vehicle/gadget.

"Maybe, it's time for a change of color. Black or blackish grey?"

"I don't know what you're talking about."

"Joker! What villainy are you-- Oh, sorry. Wrong clown."

-Batman to Krusty the Clown.

"Hawkgirl, is that you? Oh, sorry... Wrong bird species."

"Samurai! Of all the places you show up... I'm sorry dear fellow, wrong martial art."

"What are you? Some hockey pants wearing imposter from Gotham?"

After the loss of his parents at the hands of Gotham City's criminal underworld, Bruce Wayne swore an oath to defend the weak and innocent. After years of training, he uses his skills and vast resources to become Batman, striking fear into the hearts of wrong-doers everywhere. 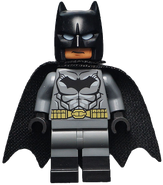 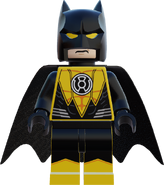 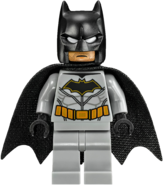 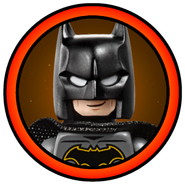 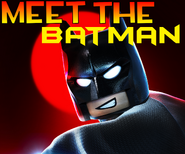 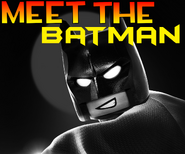