LEGO Dimensions Customs Community
Register
Don't have an account?
Sign In
Advertisement
in: Customs by CJDM1999, The A-Team, The A-Team Characters,
and 24 more

Member of the A-Team

B.A. Baracus is one of the Fun Pack characters in LEGO Dimensions 2: The Rise of Enoch, from The A-Team franchise.

The A-Team is a group of ex-United States Army Special Forces who were wrongly convicted of a crime during the Vietnam War. Managing to escape from the military police, they fled to Los Angeles, where, as fugitives, the A-Team work as soldiers of fortune, using their military training to fight oppression or injustice. Sergeant B.A., along with Colonel John "Hannibal" Smith, Captain H.M. Murdock, and Lieutenant Templeton "Faceman" Peck make up The A-Team. He was a mechanic before joining the army.

One time, three men beat up B.A.'s father, hurting him so badly that he nearly died. B.A. mentioned this one time as an assurance that he knew how to exact revenge on people who hurt someone else's father. B.A. called his place of residence in L.A., the Hotel Regina, "sleazy".

He suffers from different things, especially, Pteromerhanophobia, which is an intense fear of flying, especially when the plane in question is flown by Murdock. It is believed that he was Airborne Army Ranger before having the fear of flying, as it was Murdock's fault as the first time they met they got into a helicopter as B.A almost fell out during their first getaway. His fear of flying with Murdock as a pilot is mentioned when he tries to take a commercial flight to New York City. His denigration of Murdock's piloting abilities seems vindicated after a crash in South Carolina that would have been avoided if Murdock had chosen to fly a functioning airplane.

Of this fact the Team is often overcome by other members of the team drugging him, knocking him unconscious, or, as in one episode, hypnotizing him, so he can be transported without objection. In the Season 1 episode (The Beast from the Belly of a Boeing), he is on a plane pretending to be a maintenance technician with Murdock when the plane suddenly takes off. He immediately falls into a catatonic state while Murdock tries to revive him. Furthermore, in two episodes (The Sound of Thunder) and (Quarterback Sneak) B. A. hops onto a helicopter which is piloted by Murdock (although he is said to have gone catatonic during the plane ride in "The Sound of Thunder"). However, there have been points when B. A. chose to fly, such as when it was the fastest way to Chicago (to protect his mother) at Season 4 episode (Lease with an Option to Die). At other points, he endured flying because his country "asked him to".

In the Season 3 episode The Island it was shown that B.A dislikes any type of reptiles, and fearful of crocodiles.

B.A. is prone to seasickness, but there is a lack of data concerning whether this affects him in the air. Given that he used to mine bridges in Vietnam by SCUBA diving under the water line this would seem to be strictly an above-water problem. 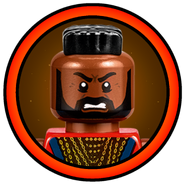