LEGO Dimensions Customs Community
Register
Don't have an account?
Sign In
Advertisement
in: Customs by CJDM1999, Custom Characters by CJDM1999, Frozen,
and 22 more

Anna is one of the Blind Bag characters in LEGO Dimensions 2: The Rise of Enoch, from the Frozen franchise.

Queen Anna of Arendelle (pronounced "AH-na") is the protagonist of Disney's 2013 animated feature film Frozen and the deuteragonist of its 2019 sequel. She is the second-born daughter of King Agnarr and Queen Iduna, the younger sister of Elsa the Snow Queen, and the contemporary ruler of Arendelle. During their childhood, an accident involving Elsa's magic created a rift between the two sisters, leaving Anna devoid of love for many years. Despite this, Anna remained big-hearted and optimistic, albeit socially awkward. When their estrangement incidentally triggers an eternal winter, Anna embarks on a perilous journey to save her kingdom and mend the broken bond between herself and her sister.

Three years after her adventure, a rekindled Anna and Elsa embark on another journey to confront the elemental spirits of the Enchanted Forest. Upon their journey's end, Elsa chooses to remain in the forest as the fifth spirit, so she abdicates the throne, allowing Anna to be crowned Queen of Arendelle.

Anna is loosely based on Gerda, the female protagonist of the Hans Christian Andersen fairy tale "The Snow Queen". 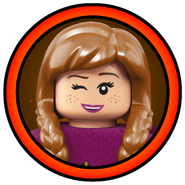