"This should be interesting."

Anakin Skywalker is one of the Fun Pack characters in LEGO Dimensions 2: The Rise of Enoch, from the Star Wars franchise.

From an early age, Anakin Skywalker lived on Tatooine as a slave to Gardulla the Hutt, then later to Watto. At the age of nine, Anakin encountered Qui-Gon Jinn, Padmé Amidala, Jar Jar Binks, and R2-D2 at Watto's shop, where they were looking for a hyperdrive motivator. Qui-Gon attempted to purchase one from the shop with Republic credits, but was unable to make a deal with Watto due to the currency not being accepted on Tatooine. Anakin later discovered that they were on a mission to Coruscant, but their star cruiser suffered heavy damage during the escape from Naboo and they needed to purchase some parts and repair their hyperdrive to continue the journey.

Anakin then offered to enter the upcoming Podrace for the stranded party, so that Qui-Gon could bet on him and get the required parts of Watto if he won. The day of the race came, and despite being sabotaged by his rival Sebulba at the beginning of the race, Anakin managed to win the Boonta Eve Classic. Qui-Gon got the required parts from Watto, and also informed Anakin that he was no longer a slave, due to another bet made by Qui-Gon of which Anakin was not aware.

As Qui-Gon and Anakin returned to the ship, Qui-Gon was attacked by Darth Maul. Following Qui-Gon's orders, Anakin continued to the ship, and told them to hover near the lightsaber duel. Qui-Gon leapt onto the boarding ramp, escaping the Sith Lord.

Anakin travelled with the others to the Republic capital of Coruscant, where Qui-Gon and his Padawan Obi-Wan Kenobi took him to meet the Jedi Council and asked them for him to be trained as a Jedi, his strong connection in the Force being a major reason as to why he was able to win the Podrace. The Council denied Qui-Gon's request due to Anakin being what they felt was too old to begin the training. When the Queen decided to go back to Naboo to fight for the planet's freedom, Anakin once again accompanied her, Jar Jar and the Jedi on the journey.

On Naboo, a battle ensued, which resulted in Anakin hiding in the cockpit of a Naboo starfighter. When trying to help Padmé and the Naboo soldiers with some Droidekas, Anakin inadvertently turned the ship's engines on, and the ship's autopilot system took him and R2-D2 into the space battle above Naboo. Anakin's ship was hit by a Vulture Droid in the battle, and he crash-landed inside the control ship's hangar. Eventually, the systems rebooted, and Anakin fired proton torpedoes into the ship's reactor, causing an overload and destroying the ship as he escaped.

Back on the planet, Anakin learned of Qui-Gon's death at the hands of Darth Maul, and also discovered that the Council agreed to let the newly-knighted Obi-Wan Kenobi train him as a Jedi.

Ten years later, Anakin and his Master Obi-Wan were ordered by the Council to act as bodyguards to now Senator Padmé Amidala after a recent failed assassination attempt. Not long after they began their duties, another attempt on Padmé's life was carried out. Anakin saved Padmé from two kouhuns, while Obi-Wan grabbed onto the hovering courier droid which deployed the venomous insects, hoping it would lead him to whoever sent the droid to Padmé. Meanwhile, Anakin commandeered an airspeeder to catch up to Obi-Wan.

Obi-Wan dropped off the droid as it was destroyed by its owner--bounty hunter Zam Wesell. Anakin flew underneath Obi-Wan and caught him in the speeder. They then chased Zam Wesell through Coruscant. Anakin leaped out of the speeder and landed on Zam Wesell's speeder, while Obi-Wan took over flying the speeder. Anakin began to cut through the speeder cockpit, but dropped his lightsaber. However, Zam's speeder was damaged and crashed, causing Anakin to fall off. Zam escaped the wreckage and entered a nearby cantina. Anakin and Obi-Wan followed suit after Obi-Wan returned Anakin's lightsaber which he caught. The pursuit ended with Zam attempting to kill Obi-Wan, only to be defeated by the Jedi. Obi-Wan and Anakin took Zam outside the cantina and attempted to interrogate her, but before she could reveal any important information, she was killed by a toxic dart, fired by Jango Fett who escaped with his jetpack.

Following these events, Anakin was ordered to escored Padmé back to her homeworld of Naboo and protect her from any assassination attempts. Some time after the two arrived on Naboo, Anakin began dreaming that his mother, Shmi, was in danger. So, Anakin and Padmé then travelled to Tatooine in search of her. Anakin soon discovered from Watto that his mother had been freed by Cleigg Lars, whom she soonafter married. Travelling to the Lars homestead, where he met Cleigg, his son Owen and Owen's girlfriend Beru, Anakin learned that Shmi had been taken by Tusken Raiders. Taking the Lars' speeder bike, Anakin set out on a journey to find her. Anakin eventually located his mother, finding her in a Tusken camp, arriving just as she died. Following her death, Anakin destroyed the entire village of Tusken Raiders before returning to the Lars homestead with his mother's body.

After recieving a distress call from Obi-Wan on Geonosis, Anakin, Padmé, R2-D2, and C-3PO travelled there to rescue him, but soon found themselves captured as well. After escaping from his chains and defeating several squads of droids with the help of a Jedi strike team, Anakin participated in the Battle of Geonosis and fought Count Dooku alongside Obi-Wan, but lost half his right arm in the duel. Following Dooku's escape, Anakin married Padmé in a private wedding ceremony. The newly-Knighted Anakin would then fight in several battles in the Clone Wars alongside his new apprentice Ahsoka Tano. Ahsoka never became a Jedi, and left the Order after being unjustly accused of bombing the Jedi Temple.

Three years into the war, Anakin went on a rescue mission with Obi-Wan to save Chancellor Palpatine, who had been abducted from Coruscant by General Grievous. In this, Anakin had a rematch with Dooku and defeated him. Palpatine goaded the young Jedi to kill the Sith, which he did. Then Palpatine recommended Anakin to become a member of the Jedi Council, which arose Jedi suspicions. They gave him a seat, but denied him the Master title. Angered, Anakin met with Palpatine who expressed his disapproval, planting in him distrust of the Jedi. He then told him "an old Sith legend" about Darth Plagueis and his power to prevent people from dying, before revealing that he himself was Darth Sidous, Dark Lord of the Sith. Anakin relayed the information to Mace Windu who then organized a strike team to arrest the Chancellor. But he had second thoughts and arrived at Palpatine's office to find the Sith being held by Windu at bladepoint. Palpatine fired Force Lightning at the Jedi Master and both combatants pleaded for his loyalty. Anakin then panicked and drew his lightsaber, cutting off Windu's hand. Palpatine then killed the Jedi Master with Force Lightning and Anakin, now irreversibly involved in the conflict, had nowhere to go. Sidious then convinced him further to join the Sith and Anakin then complied. Sidious then gave him a Sith name and at this point, Anakin Skywalker was no more and Darth Vader was born.

The true Anakin Skywalker would not later surface until approximately 23 years later when Palpatine tortured his son, Luke Skywalker, with Force Lightning. Vader was torn between his loyalty to the Emperor and his love for his son. He feared the Emperor, but his love for his son was stronger, rebirthing Anakin Skywalker and destroying Vader. Anakin then grabbed Palpatine from behind, hoisted him into the air, and threw him into the reactor shaft of the Death Star II, killing him. But the Emperor's lightning short-circuited Anakin's life-support system, mortally wounding him. At his shuttle, Anakin requested that Luke remove his mask so that he could see his son with his own eyes. Luke complied and Anakin died, telling Luke to "tell your sister...you were right." Following his death, Anakin had a spiritual meeting with Obi-Wan Kenobi, turning into a Force Ghost before appearing with the ghosts of Obi-Wan and Yoda to Luke, Leia and the other victorious Rebels at the celebrations on Endor. He was later worshiped by Kylo Ren, who was unaware of his redemption. 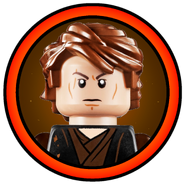 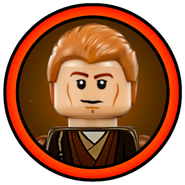