Start a Wiki
WARNING! CONCEPT CONTENT AND SPOILERS FOR MAGIC EXE AHEAD!

“Oio, boios! Alabaster Dresden, here to save the day!”

Alabaster Dresden is one of the Magic EXE characters for LEGO Voidhoppers, appearing in its Story Pack.

Alabaster was just a normal teenager, up until he had to go to rehab and therapy for an apparent video-game addiction. In reality, he was just as sane as always, but even that was soon threatened as he was abducted and thrust into a prototype roleplaying game, named "Terraverse". Alabaster meandered around after leaving the Tutorial until he found what was to be his main hub in the world he'd blindly chosen: the universe of Harry Potter.

He found Hagrid and got him to lead the Gamer to Hogwarts School of Witchcraft and Wizardry, which he promptly enrolled in as an adult student. He retrieved a wand and was sorted into Slytherin, and soon showed physical combat prowess beyond what most wizards could do. It also wasn't long before Alabaster was singled out by more conservative wizards and witches at the school for his preference for Muggle equipment, a turn of events that strengthened his existing friendship with Harry Potter.

Alabaster became an Orca Animagus between his first and second years, built his own staff between the second and third, and founded his own dungeon between the fourth and the fifth.

During the Battle of Hogwarts, Alabaster was reinforced by a guild of the sixteen other Beta Testers in Terraverse, which, following Alabaster's victory over both Lord Voldemort and villainous, megalomaniacal Terraverse developer Icarus Rourke, invited Alabaster in for entry. Alabaster declined, feeling betrayed by the guild for not having sought him out sooner, despite the fact that one of his friends ran the guild and that they had explained having to get around the tight security measures surrounding the Harry Potter universe after the Battle of the Department of Mysteries.

Afterwards, Alabaster left Hogwarts, venturing, eventually, to the Pirates of the Caribbean universe in time for the Dead Man's Chest/At World's End story. He stayed here, surviving as a captured member of Barbossa's crew on the Queen Anne's Revenge after Barbossa's theft of the Black Pearl, and rejoining Jack's crew in Dead Men Tell No Tales. It was here, however, he met his own death, sinking the Silent Mary in an attempt to destroy her.

Alabaster, during the Battle for the Diamond Fist.

The current physical figure of Alabaster. 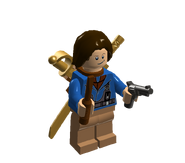 A rejected version of Alabaster from LEGO Multiverse.

A re-render of Alabaster's LMV variant.

Alabaster with a new staff design which is more to scale.

Alabaster's desert clothing and variant, first seen in Kiaan's Citadel.
Add a photo to this gallery

“Hahah. Just keep in mind that I've already spotted ten problems for you and marked them on my HUD.”

— Alabaster when encountering a mech or bigfig

“No, no, no! This can't be happening! What if we break the spacetime continuum?!”

— Alabaster reacting to himself

— The other Alabaster reacting to Alabaster's reaction to himself

“So you're a capital-G Gamer as well? Well, it's nice to know I have friends here...”

— Alabaster when obtaining a collectible

“Only characters with the ability [insert ability name here] can use these objects. Anyone else have this down?”

— Alabaster's first line when unable to solve a puzzle

“Oh, wait, I recognize something about this! I didn't spend seven years as an unnamed extra in the LEGO Harry Potter games to see this pass by!”

— Alabaster's first line when able to solve a puzzle

“Puzzle Solved! Now, we advance through the level until we see the next big puzzle... Or boss fight, unless Mr Eyes In The Sky here directs us to a detour...”

— Alabaster after solving a puzzle

“(Sarcastic) Oh no. My greatest weakness. Easily-defeated crowds of minions.”

“Now THIS is more of a challenge! One boss soup, coming right up!”

— Alabaster when encountering a boss

“Hey, you edgy or somethin'? Not happy to be alive despite the DANG MIRACLE THAT SAVED YOU?!”

— Alabaster after Gamer Kid's "What, no permadeath?"

“Oh, as if your Proton Pack bootleg doesn't violate the Law of Conservation of Energy?”

— Alabaster after Derek's comment on breaking the laws of the universe

“I can help you with that, actually. One Disillusionment Charm coming right up!”

“Just call me if you want another dose of self-aware Gamer!”

Ground Pounds (Changes depending on weapon equipped), in order:

Alabaster's tag is Slytherin green, with its crest at the back and the Looking Glass of the Moon at the front.

Retrieved from "https://lego-dimensions-customs.fandom.com/wiki/Alabaster_Dresden_(DetectiveSky612)?oldid=38788"
Community content is available under CC-BY-SA unless otherwise noted.