Member of the Rebel Alliance

Ahsoka Tano is one of the Blind Bag characters in LEGO Dimensions 2: The Rise of Enoch, from the Star Wars franchise.

At a young age, Ahsoka Tano was discovered by Jedi Master Plo Koon and raised in the Jedi Temple. Later, when she became Anakin Skywalker's Padawan, she followed her Master on several missions. Her first adventure with Anakin was delivering Rotta the Huttlet back to his father. She also fought in the Second Battle of Geonosis along with her Master, Luminara Unduli and her Padawan, Barriss Offee. Ahsoka also had a role in capturing the bounty hunters Bossk, Aurra Sing, and Boba Fett when they held hostages on Florrum. As the Clone Wars progressed, Ahsoka took to using a shoto (shortened lightsaber) along with her regular blade.

Later, she was framed for blowing up the Jedi Temple Hanger and murdering the bomber. With the help of an unseen person, she escaped her cell and sought refuge in the Coruscant underworld, where she teamed up with Asajj Ventress and, with the help of Barriss Offee at the Jedi Temple, found what appeared to be clues that she hoped would lead to the real murderer. She was later captured by Commander Wolffe after dueling with a masked assailant wielding Ventress's lightsabers. The Jedi Council expelled her from the order and Ahsoka was put on trial by the Senate. The cry for the death sentence gained overwhelming support until Anakin, who had been attempting to track down the true mastermind, revealed that Barriss, Ahsoka's one-time friend, was guilty of both the temple bombing and attacking Ahsoka. The trial dealt with Barriss from then on and Ahsoka was offered a place back in the Jedi Order. After considering, however, she refused, as she felt alienated that the Jedi Council hadn't trusted her and she wanted to sort her thoughts on her own.

14 years after the creation of the Galactic Empire, she was involved in a rebel movement, and worked with Senator Bail Organa of Alderaan, under the code name 'Fulcrum'. She communicated frequently with rebel cells around the galaxy, and she soon came across the Lothal rebels. She provided them with enemy intelligence crucial to attack the Empire in certain missions. During the rescue of Kanan Jarrus, the leader of the Lothal rebels, the rebels lost their stolen Gozanti-class cruiser, making them unable to jump to hyperspace. The rebels were attacked by armadas of TIE fighters and Star Destroyers, however, Chopper unexpectedly brought in The Ghost and 3 CR-90 corvettes to aid them. Briefly unbeknownst to the rebels, the assistance was from Senator Organa and Fulcrum, the latter being inside The Ghost. Once the rebels were safely away from The Sovereign, Fulcrum revealed herself to actually be Ahsoka Tano, former apprentice of Anakin Skywalker, and then informed them that there is a much wider rebel network out there in the galaxy, and that the Lothal rebels were one of the many rebel cells. 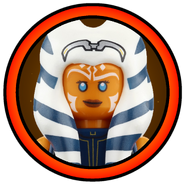